Here is a list of books I’ve read in the last year or so.

“The Color Of Water,” by James McBride.  This is the best story I’ve read in a while. It’s a memoir written by McBride through both his and his mother’s view points. The book cover states it is a “black man’s tribute to his white mother.” But it is so much more than that. It is a story of triumph over adversity, coming to understand your parents, and an introspective look into one woman’s painful past and how God heals. Very touching and moving story that I recommend to all. Check out McBride’s cool website. It’s interactive.

“Extreme Measures”, by Vince Flynn. This is the 6th novel in the series about anti-terrorist operative Mitch Rapp. This one was actually more about another character, Mike Nash, who is an ex-Marine working for the CIA. I liked the story, but not as much as the other ones because I missed the Mitch Rapp character. But along with all of the very serious scenes, there were a few humorous ones as well. The ex-Marine tackling a diaper change for his two year old son, for example. That was funny. If you like the political thrillers, read the Vince Flynn novels.

“Falling Awake,” By Jayne Ann Krentz. This is a novel about people who have lucid dreams (they can control portions of their dreams as if they are awake). A murder/suspense/romance novel that’s a quick read for those looking for entertainment reading.

“Protect and Defend,” by Vince Flynn. This book continues the Mitch Rapp series about the anti-terrorist operative as he finds, interrogates and sometimes destroys the enemy. Excellent read for those who enjoy the fast paced, but very detailed journies of the CIA and other anti-terrorist groups in the government and beyond.

“My Sister’s Keeper,” by Jodi Picoult. The movie based on this book is coming out later this month. The story was riveting and kept my attention. Since it’s told in the first person for each character, I’m not sure how the movie version can compare, but we’ll soon find out. I didn’t like the ending for the story, but as life goes, so does the novel. Have tissues handy for this one.

“Pillars of the Earth,” by Ken Follett. Recommended to me by my cousin, Sheila, this is a historical novel which has been getting much press since it appeared as one of Oprah’s books of the month. I was a little hesistant about reading it, simply because of it’s size (973 pages). But now that I’ve finished, can say that I was very caught up in the story. One of the main characters is a mason by trade, and since my great uncles and grandfather were also masons, I feel a kind of pull to the story. I wish I could ask my ancestors questions about mortar and stone and all sorts of things. The story in the book takes place in the 1100’s, and there’s a reference to some royalty that my family is supposedly decendent from, so that made the book interesting as well. It was a great read, and I recommend it! But beware: after carrying that book around with me for so long, I felt as if I were carrying the pillars of the earth as well!

“Consent to Kill,” and “Act of Treason,” by Vince Flynn. These are books that were recommended to me by David, my cousin Lorraine’s husband.  They are political/thriller/suspense type stories. Not usually my number one choice in light reading, but the stories are captivating and the main character is way cool.  Besides, the picture of the author on the back cover can sometimes make me drool. He’s handsome indeed.

“Alibi Man,” by Tami Hoag. The main character is from another book by the same author, which I enjoyed. That one was “Dark Horse.” The woman lives on a horse farm in Florida, but she’s a former detective. Even though she’s no longer on the force, somehow she’s drawn back to solving crimes because they happen in front of her. Kind of like my life. Yeah, right!

“Breaking Dawn,” by Stephenie Meyer. This is the fourth and final book (I think) in the girl loves vampire series for young adults. I was “grossed out” by the first half of the book because of the subject matter. I won’t spoil it for those who may read it. But it was a little too bizarre for my tastes. Still, I kept reading to the end. And so because of that,  I have to say that I did enjoy the read, if only to see how the saga would end.

“Prior Bad Acts,” by Tami Hoag. It’s a suspense story, much like the one I wrote and am still searching for an agent to represent. Hoag’s version is good. Not a light hearted read, though. If you like crime dramas, this one’s for you. Fast paced and kind of twisty. Just like me! LOL

Also read: “Eclipse,” by Stephenie Meyer. This is third book in the vampire series, now with a werewolf in the mix. I liked this one better than number 2 (see below). In a time of my life when I should be making huge decisions, these stories are keeping me distracted and entertained. Yay!

“A New Moon,” by Stephenie Meyer. Written for mainstream Young Adult market, but I enjoyed it too. This book is the second in the series of three (so far). Although I liked it, I didn’t think it was as good as the first one in the series. If you’d like to find out what happens when a teenager falls in love with a vampire, this one’s for you!

1. “Eat, Pray, Love” by Elizabeth Gilbert. I enjoyed the story of this woman who travelled to Italy, India and Indonesia in search of herself. A long way to go to find answers to life’s questions, but it seems that it was worth the trip for her! I highly recommend this one!

2. I have met a kind woman named Staci over the Internet through my other website. Her son, Cody, passed away at a young age. Staci has written a children’s book in Cody’s honor. In fact, she has labeled Cody as the author of the book.  Staci hopes to reach millions of young readers through the adventurous story with a message of hope and inspiration to believe in wonderous things. 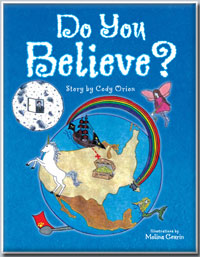 You can order the book on www.amazon.com, and then type in Do You Believe in the search box. Staci has updated this information on 03-10-11, and states that she receives no money for the book. Please check it out at Amazon!

3. My novel, “A Crime In Clancey” is ready for publication. I’m searching for an agent who will work to find the best publishing deal out there! You can find out more info about the story, view a trailer, and read excerpts at:  www.courageoushearts.com/Clancey